Weather wise, it’s been a rough Summer thus far here in Kingston, Ontario. With some beautiful sunshine for two days, followed by rain and thunderstorms for the next three days it’s been quite the brutal season so far.

If you’re looking for stuff to do in Kingston, be sure to check out these events:

The annual Princess Street Promenade is back, and takes over downtown Kingston on August 2nd, 2014. Some great shopping opportunities, lots of fun for the kids, and a fantastic community event – be sure to head downtown on Saturday, August 2nd to take in the Princess St Promenade.

If you’re a musician, you may want to bail out of the Princess St. Promenade and instead make your way to Zorba’s. Zorba’s is at bath road, and are hosting the Kingston Jam Festival. Musicians – Don’t Miss This.

One of the best music festivals there is, is just a short ferry ride away from Kingston. Splurge on a weekend pass for $125 to camp out all weekend for the best experience. Headlined by The Rural Alberta Advantage, Shad and K-OS, this promises to be another great festival.

The Ceremonial Guard from Ottawa will join the Fort Henry Guard on August 16th, 2014 at 7:30pm for what no doubt shall be a spectacular event up at Fort Henry. Click for details and prices.

Time goes so fast – this year we celebrate the 18th annual Limestone City Blues Festival. What a great month August is for music fans in Kingston! With the likes of Harrison Kennedy, Kim Pollard, Lincoln Durham and Tommy Castro & The PainKillers performing, this promises to be the usual fantastic event. See all the details.

Hosted by the fantastic Boys & Girls Club, at just $3 per person os $10 per family, the Teddy Bears Picnic is an excellent event and a great family outing. There’s always so much there that you will be able to spend the whole day and get your moneys worth – with a BBQ lunch, petting zoo, cookie decorating, bouncy castles and so many more great kid-orientated events.

It takes place at Lake Ontario Park so weather permitting – after walking around on this hot, hot day you’ll be able to cool off with the kids at the splash pad. Read more about the picnic.

While we already mentioned the Blues Festival, we wanted to highlight this. Paul Reddick, the award winning singer from Lakefield, Ontario will be performing at the Tir Nan Og. Here are all the details.

If you’re aching for some local football and just can’t wait for the season to start, then head on over to Richardson Stadium on August 24th. The Golden Gaels will take on the Concordia Stingers in their only home pre-season game. All the Details.

Various: Movies in the Square

Movies in the Square wraps up this month, so be sure to make your way down to Springer Market Square for at least ONE of the movies. The four movies airing in August 2014 are Free Willy, Jurassic Park, School of Rock and The Princess Bride. Full Schedule.

Still got the soccer bug after the World Cup? Then come out and support Kingston F.C. If you haven’t been paying attention then you may have missed out on the fact that Kingston actually has a damn good soccer team! Kingston FC have got two home games this month – August 3rd against the North York Astros and August 31st against London City.

Of course there is much more than just the above happening in Kingston – some great bands will be performing in Kingston this month like Against Me!, and the Arkells will be Rockin In The Square! Click here for the Full Listing of August 2014 Events in Kingston. 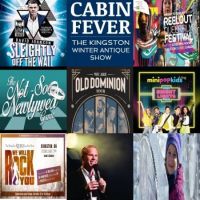