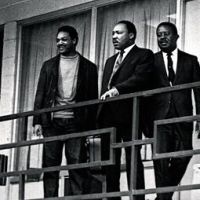 The Mountaintop is a Theatre Kingston production which takes place at the Domino Theatre from the end of October halfway through November.

The story is about the night of April 3rd, 1968. The location is Dr. Martin Luther King Jr’s motel room. MLK has just returned from a speech when a mysterious maid arrives, with more to deliver than the coffee.