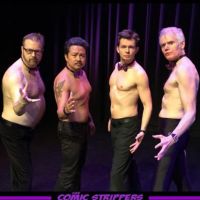 This 19+ show is suitable for both men and women – as it’s more comedy than stripping.

It’s a parody of male strippers with improv comedy, and it’s coming to the Grand Theatre on October 2nd. All reports are that this is just hilarious, and this popular act has been touring the likes of Las Vegas and Australia.

Tickets are $42 and then there’s a handling fee. It’s one night only – so if you still have some laughter in you from Howie Mandel the night before, then this is the best place to get it out!

The Comic Strippers hits the Grand Theatre on October 2nd. The event will begin at 7:30pm.