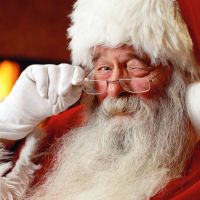 Santa Claus is a very busy man – jumping from one mall to the next so fast you’d swear there were more than one Santa!

We thought we’d make one post to cover wherever Santa Claus is going to be this year. Know of a sighting? Let us know.

First of all Santa will be very busy at the Santa Claus Parade which takes place on November 19th, 2016.

However before that he will be showing up at the Cataraqui Centre – where he’ll be sticking around. Here’s all the details for that:

Santa will brave the cold weather every Saturday in December (3rd, 10th, 17th, 24th) from 11am-2pm at Springer Market Square. There will also be public skating and horse drawn wagon rides. All free!

Santa at the Cat Centre:

Get your photos taken with Santa Claus at the Cat Centre at any of those times.

Santa at the Frontenac Mall

Santa is at the Frontenac Mall every day from November 19th through December 23rd.

You can bring your pet for pictures on Monday-Thursday each week.