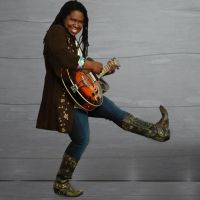 Blues legend Ruthie Foster, and special guest Harrison Kennedy, are coming to the Grand Theatre in Kingston on April 22nd, 2016.

Foster has had a long history in musc and has won numerous Best Female Vocalist awards, as well as had a Grammy nomination. Harrison Kennedy as the premier performer of blues in Canada – just ask B.B. King! And together they are going to put on a show that blues fans can’t miss.