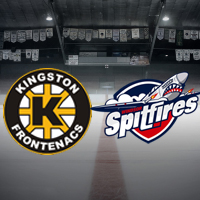 In their only home game against them all season, the Kingston Frontenacs take to the ice at the Rogers K-Rock Centre on Saturday, January 10th to take on the Windsor Spitfires.

The Frontenacs also play the previous night in Kingston, taking on the Oshawa Generals on the 9th.

The two traded wins last season, with the Frontenacs winnings 4-2 in one match, and then the Spitfires shutting the Fronts out as they won 4-0 in the other.

Should be a good game, and hopefully neither are as one-sided as last year and we get a good competitive game.

This game as mentioned is on a Saturday night, and the puck drops at 7pm EST.