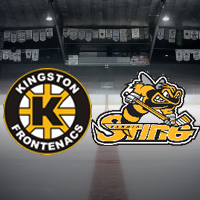 Sigh. Anyway – hopefully you’ll be spending your Saturday night down at the K-Rock Centre. After 20 days without a home game, the Frontenacs go back to back with a game on the 30th against the Erie Otters, then facing off against the Sarnia Sting on January 31st, 2015.

If you want to see the Sting in action this is the ONLY time this season they’ll be playing in Kingston, so don’t miss out.

You might just be lucky enough to see a good old Kingston thrashing. Last season, the Frontenacs beat the Sarnia Sting 4-2 and 9-1. Yep not a typo there – 9-1.

Hopefully we’ll see another result like that as we bid farewell to January.