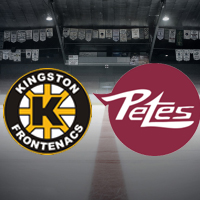 The Frontenacs will be out for revenge, with that playoff elimination heavy on our minds. Seriously – the first thing I thought when the Frontenacs schedule was announced for the 2014/2015 season was “When will we be playing the Petes?” and now we know – December 19th, 2014.

If there’s one Frontenacs game you go to this season, make sure it’s this one. It promises to be a raucous atmosphere, and just a fantastic game.