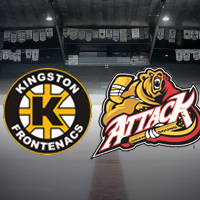 Friday, November 21st, 2014 sees the Owen Sound Attack come to Kingston to take on the Frontenacs.

The Frontenacs vs Attack match-up takes place, like all Friday night games, at 7pm EST. Best to get there a good 30 minutes beforehand so you can get yourself some beers and a late supper.

The game will go on until approximately 9pm, not factoring in overtime. Although hopefully the Frontenacs won’t need it!

Let’s get some revenge on them here.