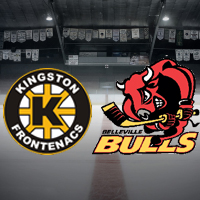 Yikes – where does the time go? It feels like just yesterday the Frontenacs were playing their 2nd home game of the season against the Belleville Bulls, and now they’re meeting the Bulls for the final time in the regular season, with just three games of the 2014/2015 season to go.

Oh well – with playoff contention decided, this should be a fun high scoring game and a nice way to slowly wrap up the regular season. Although hopefully the Frontenacs don’t push too hard – they’re playing again tomorrow night as they take on the North Bay Battalion.

Friday night, March 13th 2015 – go to the Rogers K-Rock Centre in Kingston for this match-up.