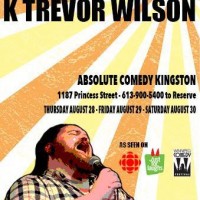 Be Sure to head to Absolute Comedy from Thursday, August 28th until Saturday, August 30th two catch to great comedians.

Tommy Fitz is from Halifax, Nova Scotia and was a semi-finalist in the 2013 Canadian Comedy Awards’ Funniest Person in the Valley and came in second place in the 2013 Yuk Yuk’s Summer Comedy Competition.

K Trevor Wilson has quite the resume. He has headlined shows all over Canada, become the only two time winner of the Toronto Comedy Brawl,has worked with likes of Mick Foley, Todd Glass and Brent Butt, won the Irwin Barker Award at the 2012 Homegrown Competition at Just For Laughs, has been on television shows and has opened for both Patton Oswalt and Louis CK.

During these shows, K Trevor Wilson will be doing a live album taping.