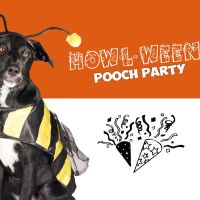 What’s better than a Halloween Party? A Halloween party which has gone to the dogs – literally!

On October 30th, 2016 from 12pm-4pm head to the Frontenac Mall and join Kingston Animal Rescue for their Howl-Ween Pooch Party.

There’ll be all sorts of dogs there as well as a lot of family friendly activities such as face painting, bobbing for treats and more. There’ll be a pet photo booth, a raffle fundraiser which will be dog themed, pumpkin carving, pet supply vendors and much more. There’ll also be a parade of the dogs at 2pm.

On top of that Wade’s Dogmanship is offering a 45 minute presentation on leash-handling which begins at 1pm, and then at 2:45pm a productive play demo.

Dress up your dog and come join the Howl-Ween Pooch Party!