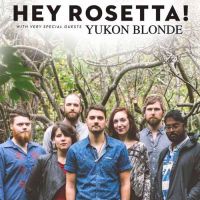 It’s one thing to go see the awesome band Hey Rosetta! in action, but this special show in Kingston also features Yukon Blonde!

Hey Rosetta!, the Juno nominated band are coming to Kingston to perform at the Grand Theatre. This Indie Rock band from Newfoundland have been around since 2005 and are a band you don’t want to miss. Especially with Yukon Blonde performing as well.

This is a highly anticipated concert, with tickets $28.50 for the B section and $32.50 for the A section. Note that there are fees on top of that.