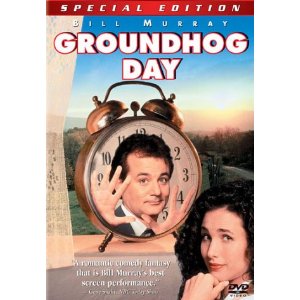 A couple of weeks ago, I warned you that if you’re sick of the Frozen soundtrack you better stay away from downtown Kingston that night, as Frozen would be playing in Movies in the Square.

I need to issue a similar warning – if you hate laughter, stay away because it’s all you will hear when Groundhog Day hits Movies in the Square on July 31st, 2014.

Starting at dusk, this classic 90s movie stars Bill Murray, who relives the same day over and over again.

If you have kids – this is the perfect time to show them some REAL comedy. Although IMDB does warn you – the idea of living the same day over and over again might scare the youngsters! That’s almost as funny as the movie itself.

This is my personal favourite of all of the movies for the 2014 season of Movies in the Square. Don’t miss it.