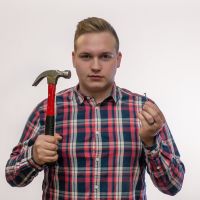 Matt Falk is the headliner, and Josh Williams is the MC at Absolute Comedy Club from September 9th, 2015 through September 12th.

Matt Falk has performed his stand up at the likes of the Winnipeg Comedy Festival and Just for Laughs. He’s also released an excellent album, Apple Pie & Scars, which managed to top the iTunes charts in the Comedy category. He also came in 2nd place at the Las Vegas World Series of Comedy – largely due to how funny he is despite having a clean act.

Josh Williams got into comedy just a few years ago at 2008. Residing in Ottawa, he has came a long way in such a short time.

Details about tickets and prices(they vary night by night) are on the Absolute Comedy Club website linked below.