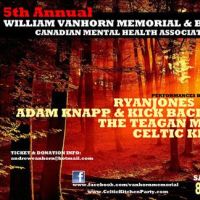 This event starts at 8pm on November 8th, 2014 and is going to go until approximately 2am, the early hours of Sunday morning.

It’s a full card of events with Ryan Jones from 8pm-9pm. Then it’s introductions by Brenda Miller from the CMHA at 9pm. The festivities continue with Adam Knapp & KickBack at 9:30pm. 11pm sees The Teagan McLaren Band take the stage, and then to end the night off it’s the Celtic Kitchen Party from 12:30am until 2am.

You can purchase advance tickets now by e-mailing andrewvanhorn@hotmail.com.

This is to celebrate the memory of William Vanhorn, with a great mixture of Celtic East Coast, Country and Pop music with some great arists that are local. A $10 donation is suggested – and proceeds to towards the Canadian Mental Health Association Kingston, to support local families and those with mental illnesses such as Schizoprehnia.