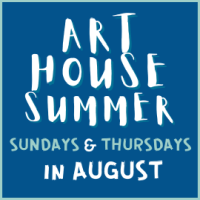 The Screening Room will be showing Art House movies Thursdays and Sundays in August and September.

Art House Summer: La Piscine (1969)
August 7 & 11
A couple’s summer holiday on the Côte d’Azur is interrupted by the arrival of an old acquaintance and his eighteen-year-old daughter—unleashing a gathering wave of sexual tension, jealousy, and sudden violence.
French language with English subtitles.

Art House Summer: Summer With Monika (1953)
August 14 & 18
Harry Lund is a nineteen-year-old man who meets Monika, a romantic, reckless and rebellious seventeen-year-old, and they fall in love. They leave their families and jobs in their small town, Harry gets his father’s boat and they spend the summer together in an isolated island.
Swedish language with English subtitles

Art House Summer: Mississippi Masala (1991)
August 21 & 25
Forced out of Uganda, an Indian family tries to make a home in Mississippi, only to discover a whole new world of racism.

Art House Summer: Woman in the Dunes (1964)
August 28 & September 1
An amateur entomologist leaves Tokyo to study an unclassified species of beetle found in a vast desert. When he misses his bus back to the city, he spends the night with a young widow in her hut by a sand dune, who is forced to constantly clear the sands that threaten to engulf it.
Japanese language with English subtitles

Art House Summer: Death in Venice (1971)
September 4 & 8
Composer Gustave Aschenbach travels to a Venetian seaside resort in search of repose, but finds no peace, for he soon develops a troubling attraction to an adolescent boy, Tadzio, who embodies an ideal of beauty that Aschenbach has long sought. A pestilence, arrives, threatening his ideals and life.